What they say about Elizabeth George:

Praise for Just One Evil Act:

“Riveting tale of love, passion, and betrayal…series fans will enjoy following Lynley and Havers on their first investigation outside the U.K., while newcomers will be just as enthralled.” – Publishers Weekly (starred review)” Just One Evil Act [is] among the most demanding and satisfying of the many detective novels by Elizabeth George.” – Wall Street Journal “A serious, suspenseful, thought-provoking and heart-rending novel.” – Richmond Times Dispatch

” In Italy, Maria Lucrezia Felice started me out in Lucca with a detailed tour that took me into churches, piazzas, parks and shops in order to familiarise me with the medieval centre of the town. She was also helpful in Pisa at the Field of Miracles, and together she and I attempted to work through the parts played by the Polizia di Stato, the Arma dei Carabinieri, the Polizia Penitenziaria, the Polizia Municipale and the Vigili Urbani when it comes to an investigation. “ 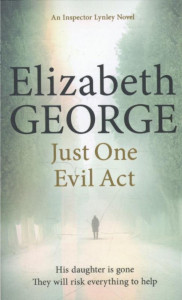 “Enjoy a tour of Lucca, Pisa, and many other wonderful places throughout Tuscany with Maria Lucrezia Felice.  Not only does she have one of my favorite names of any guest I’ve had on the show her passion comes through in each of her amazing tours.

You’ll enjoy Lucca and her tour locations as a local while popping in and out of great spots to eat, drink, and be merry as a local.

Climb a tower to enjoy the trees at the top of the tower in Lucca with an unbelievable view.  Take in the historic walls.  Do more than see the Leaning Tower in Pisa.  You’ll even cross a bridge built by the devil in Garfagnana.  It is one of the most beautiful bridges in Tuscany and in spite of it’s name completely safe.

Beyond her amazing tours you’ll be able to rent villas or apartments in and around Lucca for a complete local experience.

Visit her websites as you listen and learn about her tours, her dining tips, and her property rentals at www.mlftuscantours.it and www.luccaholidayhomes.it”

“Our morning tour with Maria revealed details about Lucca not found in the guide books. The group was small and intimate and Maria’s knowledge of Lucca’s history and her easy-going nature made for a most enjoyable tour. In addition to all the cultural information, Maria pointed out good restaurants and wine bars to visit, which we would have missed otherwise. We visited two of the restaurants she recommended as well as a wine bar that took us down some steps to a wonderful cellar beneath the streets of Lucca, an amazing find. The restaurants were wonderful with authentic Italian food and a fabulous atmosphere. Thanks Maria for a great tour of the beautiful Lucca”.
Sarah Ellis

We Love Lucca Because of Maria!

What an outstanding day!  The walled city of Lucca is a wonderful place. So much to see and do. But confusing to someone who has just arrived!  What great fortune we had to make arrangements with Maria for a Historical and Gastronomic Tour.  Maria met us at an easy to find entry gate and we were off on our tour. Her vast knowledge of all things historical was such a treat. From old Roman roads and remnants to cathedrals with mummified saints, Maria knew every detail. Add to this the visits to gourmet food shops, bakeries and candy shops for samples of the wares and it was totally fantastic. Maria is bilingual. English and Italian! By the end of the tour we felt like old time residents of the city. If you plan a trip to Lucca, you MUST arrange for a custom tour with Maria. You will not be disappointed!!  Maria is TOPS!
John and Jackie Woodall

My husband and I and 3 twenty something young people enjoyed a tour with Maria, Gourmet and History of Lucca.  We had recently arrived to Lucca and planned to spend 4 weeks in town and wanted to learn about the city and in particular the food sources and restaurants.  It was outstanding! We returned to many of the food sources many times during our stay and were very knowledgeable on Lucca when other friends and family arrived.  In fact, a friend hired Maria for the same tour.  Hire her and you will be pleased.
Suzanne King
Walking tour of Lucca was wonderful introduction to Lucca.  To have an idea of the history brings the whole place alive with the past.  Maria’s knowledge is excellent and there are wonderful stories along the way. She points out not only thing about the buildings and the people who lived there but also restaurants for good local food and shops to try as well. Maria also helped us organize tours to other parts of Tuscany. We would reccomend this as a great beginning to any stay in Lucca.
Ciao
Sue and Peter

In 2011 we took a great group tour of Lucca with Maria. Having enjoyed her informative and amiable presentation, we were fortunate to book a private tour with her on our trip to Tuscany the following year.  Unsure of what we wanted to do, Maria offered many interesting ideas and we settled on a full-day tour of Pisa.  It was great.  Maria met us in the morning and took us to the astonishingly beautiful Campo dei Miracoli.  After touring the baptistry and cathedral we went on to the cemetery.  Maria explained about its substantial damage during WWII, its ongoing restoration and illuminated its fascinating history and the many famous people who are buried there.

The rest of Pisa, though perhaps less visited, is still rich in art and architecture and interesting turns of history. Maria has an amazing knowledge this city and there wasn’t a sight she couldn’t describe in detail or a question we had that she couldn’t answer.   Besides her incredible depth of knowledge of Pisa, Maria is extremely personable and intelligent, and offers a great local’s insight into the people, culture, art and history of the area.  We had a great day and are already thinking about our next trip to Tuscany and will definitely be booking another day with Maria.

We had a great day and it was a wonderful experience that we would not have had without her!
Megan & Sam

I spent a very enjoyable afternoon with Maria on a walking tour of Lucca. I am not usually a big fan of guided tours, preferring to wander around with a guidebook but I would definitely recommend this tour with Maria. She knows the history of Lucca and its buildings inside out and is full of interesting and quirky stories which gave me an understanding of this delightful city than I would never have been able to get from a guidebook. Maria offers a wide range of tour options but is also able to customise the tour to suit whatever is of most interest to you. She’s a lovely warm person and has her roots firmly in Lucca. It was just wonderful to be able to share her enthusiasm and love for this magical city.
Donna McTavish

“We travelled & stayed in Lucca from May 26/12 to June 2/12. We would like to thank Debora from Lucca Holiday Homes for referring us to Maria. Maria promptly answered countless emails prior to our arrival to Lucca. We booked the following tours through Maria – 4hr private wine tour, private tour of Florence, organized tour of Cinque Terre, organized tour of High Grafagnana. All the tours were exceptional – she was very professional & knowledgable. The vehicles she booked for the wine tour, Cinque Terre & High Grafagnana were very comfortable. Thanks so much Maria for making our first trip to Italy so special, full of countless memories that will never be forgotten.

My husband and I, along with another couple, spent a week in Lucca and loved it.  Maria and her tours were a huge help to our group of 4 adults, whom had been travelling for a couple of weeks, and were looking to call Lucca home for the week.    We started early,  the first morning, with a 3 hour walking tour of the City and felt this gave us all the knowledge and orientation we needed for the week to come.  We learned the history, and visited the sights we would later go and spend more time viewing.  We also learned great restaurants, stores, cafes etc. and where not to go through Maria.  Later in the week, we booked the City tour of Florence and again were grateful to have Maria, as she took us to all the important sights of Florence, and we didn’t waste time wandering around or missing important sights.  The restaurant she took us to for lunch was amazing!!
Our highlight of the week, though was her best kept secret – the full day tour of San Miniato village and wine tour.  It was the most amazing and spectacular scenery of our trip.  The rich colours and beauty of which Tuscany is famous for, not to mention the amazing history, around every corner had us snapping pics like a pro.   We thought the day couldn’t get better, until we arrived at the winery and they served us an amazing five full course luncheon with all fresh and locally grown and prepared food, much of which was grown or had grazed on the property.  The Wine Tour and the leisurely stroll around the gardens, were so relaxing, and yet we learned so much about wines and the history of the property.  We loved the many samples of very good wine, and had a hard time choosing what to take home.   Oh yeah, did I mention truffles!!!?    We highly recommend  this tour, don’t let the price scare you, it was worth every cent!!!
Cathy Cantwell